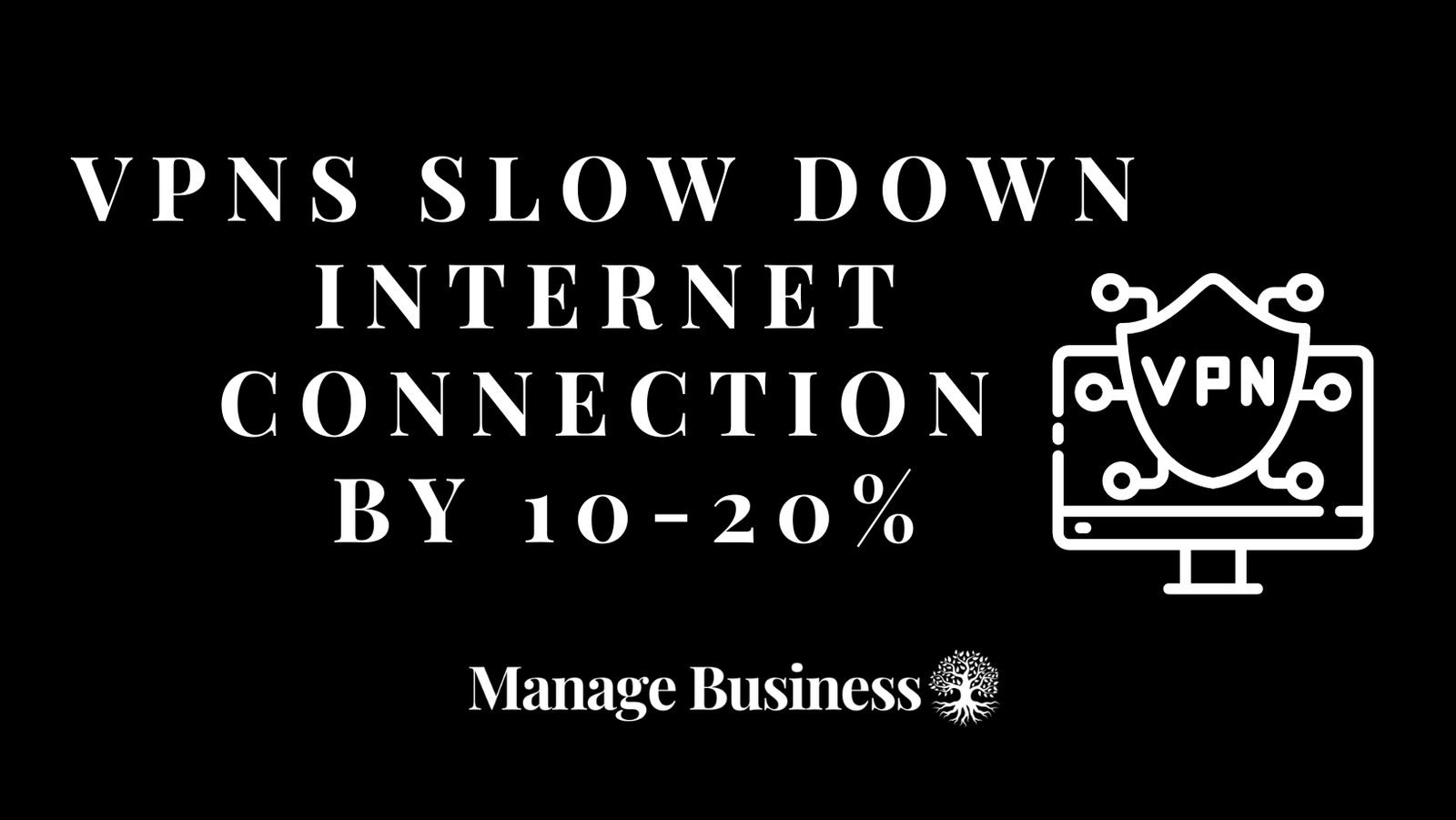 Our content is reader-supported. We may earn a commission if you make a purchase through one of our links.

Internet connection speed is a major factor in determining users’ online experience. When it comes to using a VPN commercially, businesses should always consider how VPNs slow down internet and what impact this has on overall employee productivity.

According to a study conducted by VPN specialists at Manage Business, VPNs slow down internet connections by a considerable 10 to 20%. Read on to learn more about how we reached this conclusion.

How Does A VPN Work?

There are a few things as annoying as a slow internet connection. A slow connection makes it near impossible to work with a clear mind, and this can have a profound impact on employee productivity.

Why and how do VPNs slow down internet connections? The answer to this question is a little nuanced. Let’s set things straight for you by explaining how a VPN works.

A VPN or Virtual Private Network creates an encrypted tunnel between your device and the internet. This means all data that’s going out of your device is encrypted before it travels over the internet. Similarly, all data coming back to your device is also encrypted and only gets decrypted when it reaches the VPN client back on your device. This encryption layer makes your data safe as third parties can no longer intercept your traffic and track your online activity.

A VPN also hides your IP address by masking it with the server’s IP. This makes you invisible online and no one can trace your traffic back to your device.

Why Do VPNs Slow Down Internet Connections?

When you use a VPN, your traffic goes through an extra encryption and decryption process. Rather than just flowing in and out of your device, it has to be packed and unpacked first. This leads to an obvious decrease in the overall data transmission speed.

Plus, your traffic travels through a more indirect route when you’re using a VPN. When you access a website, the request first goes to the VPN server and then to the site you want to visit. Similarly, all data coming back to you has to first travel to the server before coming back to you. This can slow down your internet connection further.

Different VPN Protocols and How They Affect Connection Speed

PPTP one of the oldest and most common VPN protocols. It uses a TCP control channel and generic routing encapsulation to encapsulate packets in PPP packets. It was first developed by Microsoft and was even integrated into Windows 95 however it was quickly cracked due to its weak encryption which does not make a very secure VPN Protocol.

However, due to its simplicity Point-to-Point Tunneling Protocol has exceptionally good speed compared to other VPN protocols. Also because this is the oldest protocol to exist, it also has a wide range of support for developers too.

L2TP is an extension of the older PPTP and it aims to fix the common issue that is present in the latter which is its weak security. The protocol ensures that data must pass through an encryption protocol. However, it uses encryption only for its own control messages and does not encrypt the actual content.

Similar to PPTP it has high speeds and is widely used. However, since it relies on a single UDP port for its connection it can easily be blocked.

An open source protocol technology, OpenVPN has recently grown in popularity. Almost all major VPN service providers use it. It’s ironclad AES-256 bit key encryption, 160-bit SHA1 hash algorithm, and 2048-bit RSA authentication make it one of the most secure protocols out there.

OpenVPN has one of the strongest encryption standards to date. However, it also is the slowest because of the time it takes to encrypt the data and not suitable for large flows of data that need quick delivery.

SSTP provides a way to support PPTP traffic with SSL/TLS channels. This provides a decent level of security and data integrity along with an average network speed drop. This is popular due to its full integration with every Microsoft operating system since Windows Vista 1. SSTP also offers great support for native and third party clients.

IKEv2 is a protocol responsible mainly for request and response actions. It handles security with the help of IPSec. This protocol is exceptionally good at establishing a link back after losing connection temporarily and also at switching connections across networks.

It is great for cellular connections as it’s one of the fastest VPN protocols. Since it’s a great open source option, you’ll find many commercial VPN services offering IKEv2 as an option.

WireGuard® is the latest and fastest VPN protocol in the entire industry at the moment. The big plus is it uses very strong cryptographic systems to maintain high security and data integrity (which also covers content confidentiality).

However, despite its amazing performance in most fields it’s still in a testing stage and many VPN providers have not officially adopted WireGuard as a protocol. It’s free and open source and also very fast and mobile friendly similar to IKEv2 however it is incomplete and hasn’t matured enough as a protocol yet.

Now that we’ve discussed VPN protocols we can see some patterns and the pros and cons of each protocol. Usually, VPN protocols that use complex cryptography for encryption take much more time and computing power. Therefore, they consume greater bandwidth and slow down the connection.

However, advanced protocols like OpenVPN, IKEv2 and WireGuard have mechanisms in place to make up for or cope with the time lost in encryption. This is why, they’re the most commonly-used protocols in the industry.

Apart form the VPN protocol, what other factors affect internet connection speed when using a VPN?

Your distance from the VPN server itself is a big factor in the speed drop that using a VPN might result in. A larger distance can affect the speed purely because of the time it takes just to reach the server itself and then travel back.

Generally, quality VPNs with global support tend to have more servers placed globally. This increases the chance of a server being closer to you, which means it’s going to have a better speed even if the protocol itself is not very speed-driven.

Server traffic also serves a big part in the speed game. As an example, a server with 100 clients is going to perform better speed-wise as compared to one which has 1000 clients. With less users per server, each user gets more time and processing power.

Server load is also a very important factor when considering which VPN service to use. Free VPN services tend to have a lot of users and much less servers in comparison. This is not always the case but an obvious general trend because of an entry threshold.

In conclusion, VPNs do slow down internet speed but the drop depends largely on the protocol you use, how far you are from the VPN server, and whether the server is crowded or not.

previousWhat Is a Domain Name?
nextWhat is VPS Hosting?